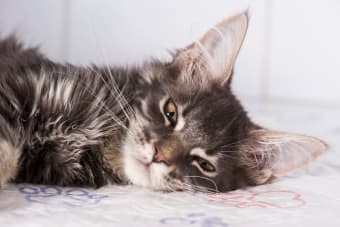 Sometimes it can be hard to tell if your cat is sick or feeling under the weather because they are experts at hiding their discomfort. That's why cat parents have to pay attention to their feline companions and be knowledgeable about the signs to look out for. In this blog, our Boulder vets discuss some contagious illnesses that are common among cats as well as when humans have to be careful.

Cats are impassive animals and are very talented at hiding signs of pain or symptoms of illness. Often, cats will hide out of sight when they don't feel well. This is what makes it hard to tell if your cat is sick. This makes it very important for pet parents to keep an eye on their cat's health and be prepared for when their beloved kitty does show signs of being unwell.

There are contagious illnesses that are seen more frequently than others among cats, and there are a couple you should know about if you have a cat in your home.

Viruses and bacteria such as feline herpesvirus and feline calicivirus can lead your cat to develop an upper respiratory tract infection which affects their nose, throat, and sinuses.

These illnesses are very contagious among cats that live in multi-cat homes, in shelters, or spend a lot of time outdoors and encounter other cats. Feline herpesvirus and feline calicivirus are transmitted during regular activities such as grooming, sharing a food or water bowl, or coughing and sneezing.  Cats infected with the virus can then easily go on to transmit the illness to other cats within the household, or within the neighborhood. Common symptoms of upper respiratory illness in cats include:

Feline Immunodeficiency Virus or FIV as it is commonly called is most often seen in male outdoor cats with a tendency to fight. This cat illness can be very serious and is often spread through bites obtained during fights, however, in rare situations, it can be passed from a female cat to her kittens.

FIV is a slow-acting virus and sometimes the symptoms might not even show up until years after the initial infection occurs. That said, FIV can severely weaken your cat's immune system once the disease takes hold making your feline friend susceptible to several serious secondary infections.

With the appropriate treatment, infected cats that are kept in an indoor, stress-free environment can live comfortable lives for several months or years before the disease reaches its chronic stages.

If your cat is infected with FIV, symptoms may not become apparent for months or years, or they could be intermittent. If your kitty is displaying any of the following symptoms it could be suffering from Feline immunodeficiency virus (FIV) and require immediate veterinary care to help prevent symptoms from becoming more severe.

Common symptoms of FIV include:

Can I Catch an Illness From My Cat?

Yes. There are a few illnesses that are common among cats that can be spread to people, these are called Zootonic illnesses. But, you will be happy to know that it's very uncommon to get sick from your pet. However, you are at a higher risk if you have a weakened immune system.

Don't worry you don't have to give up your cat, you just need to take the proper measures recommended by your vet such as keeping your cat indoors, staying up to date with your kitty's shots and parasite prevention, and taking your cat to the vet for regular checkups.

Below we have provided a list of some of the most common Zootonic cat illnesses:

If your cat is displaying any signs of a contagious cat illness contact our Boulder vets because they have the tools and knowledge to provide your pet with a diagnosis and treatment plan.

Rocky Mountain Veterinary Cardiology is accepting new patients! Our experienced vets are passionate about the health of Boulder and Denver companion animals. Get in touch today to book your pet's first appointment.